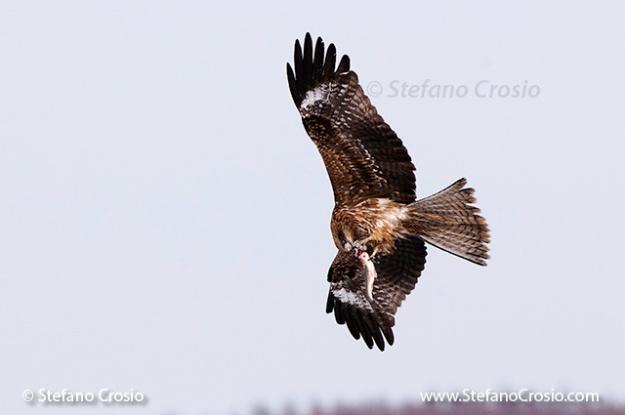 This image is of a Black-eared kite (Milvus migrans lineatus) eating a fish in flight: it is a shot that I particularly like because it shows an interesting behavior of the bird.

Black-eared kites are large birds of prey with dark brown plumage and black feathers over the ears. They have large wings (with a wingspan of about 50 to 60″/130 to 150 cm) and spend much of the time soaring and circling in the sky. Viewed from beneath, kites have prominent broad white patches under their wings, just before their dark wingtips. The end feathers often splay into “fingers” when they’re flying (source: Japan Times and Silly Reflections).

A new gallery with a selection of my bird images is now available on my Web site (feel free to go check it out, if you feel like it!): among other bird shots, it includes several images from my trip to Hokkaido, the northernmost of Japan’s largest island, where in the winter numerous white-tailed sea eagles, Steller’s sea eagles and red-crowned cranes congregate to hunt for fish.

This image of a juvenile white-tailed sea eagle (Haliaeetus albicilla) in flight is one of those rare moments that make the day of a wildlife photographer, when everything comes together just the way you wanted/hoped for! The sea eagle is tack sharp, it has got the fish in its claws, the entire wingspan (which, at over 2 mt/6.5 ft, makes them the fourth largest eagles in the world!) fits just perfectly within the vertical shot with no clipped feathers, and the eagle looked back at just the perfect time: man, what do you want more? 🙂

Also, a selection of Arctic and Subarctic images of mine has been published in the wonderful, inspirational, educational blog The World According to Dina, that revolves around pretty much everything having to do with the North of the world and her beautiful home country, Norway: please do yourselves a favor and pay my gracious hostess Dina (whom I wholeheartedly thank for inviting me as a guest author!) a visit and check out for yourselves how magical a place her blog is and how masterfully she juxtaposes her beautiful photographs with just the perfect quotes to go with them! 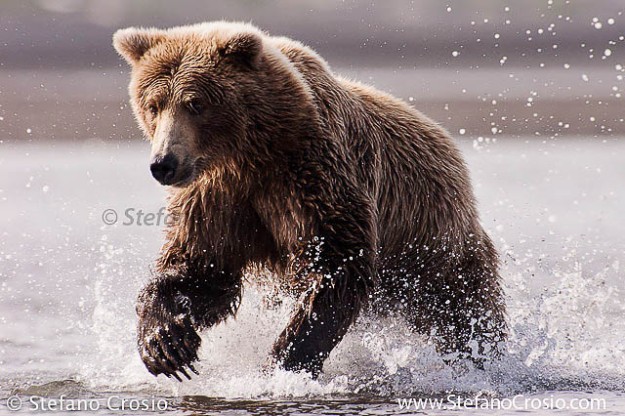 Beside loving bears, which I find truly fascinating animals, I love Alaska: such beautiful country, most of which is still wild and pristine, notwithstanding human efforts to drill more oil out of it (will we ever get rid of so dirty an energy source?…)

I visited Alaska twice, and I hope I will be able to go back in not too long a time. The first time I went to Katmai National Park, and the second time back to Katmai (although in a different area) and then on to the Kodiak archipelago. Alaska and Katmai in particular are among the best places you may be at to observe and photograph coastal brown bears. These are often interchangeably called “grizzlies” but, although they both belong to the species Ursus arctos, coastal brown bears (as the name implies) prevalently live in coastal areas and tend to be bigger than grizzlies who are considered a distinct subspecies (Ursus arctos horribilis) and live inland, away from major bodies of water.

If you travel to Katmai in the Summer, chances are that you are going to witness one of the most exciting phenomena in the life cycle of a coastal brown bear: the salmon run. Around that time of the year, wild sockeye salmon enter their spawning phase, during which they somehow find their way back from the ocean to the very same river where they were born so that they can work their way upstream, reach the headwater gravel beds of their birth, lay their eggs and generally die within a couple of weeks (because when they return to their original freshwater environment, they stop eating and live off their fat reserves).

Clearly, brown bears are not indifferent to nature’s call that brings the salmon back to accessible waterways to reproduce. Since fall and then winter are fast approaching (and with them a long period of hibernation), brown bears enter a phase known as hyperphagia where they maximize their food intake (they can eat up to 90 pounds of food per day!) to build up sufficient fat reserves to survive the hibernation months. In this period, coastal brown bears congregate by the shore or next to river banks anxiously waiting for one of their favorite prey to arrive in huge numbers.

When salmon eventually comes, all hell breaks loose and bears start chasing salmon in shallow waters to catch them and eat them. Bears are especially fond of salmon eggs, so much so that, after a bear has eaten enough fish for a day, sometimes it keeps catching more salmon just to eat the eggs while discarding the rest (for the seagulls’ happiness).

While I was observing a group of about six bears chasing salmon in the estuary of a river in Katmai, this young bear started sprinting in my general direction in pursuit of a salmon (that eventually proved to be faster than the bear) and gave me a great opportunity to freeze the motion of the bear at the peak of the action. The low angle of the image (that I shot kneeling in the sand) accentuates the majestic nature of the bear and creates an eye-level connection with the animal. Hope you like it!