Disclaimer: this review is of a sample that I received from the producer’s US importer. My review has been conducted in compliance with my Samples Policy and the ISA wine tasting protocol and the opinions I am going to share on the wine are my own. 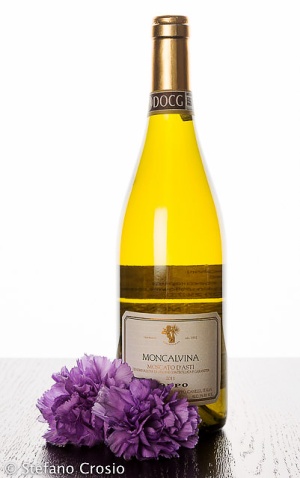 The wine that we are going to review today is a sweet wine from Italy’s Piemonte region, namely Coppo, Moscato d’Asti “Moncalvina” DOCG 2011 ($16).

Overall, the Moncalvina was a very good Moscato, one that is easy to drink, pleasant in the mouth, with great bouquet and flavors, as well as a lively acidity that perfectly counterbalances the wine’s sweetness. Whether you desire to match it to an appropriate dessert (something simple, like shortbread cookies or panettone) or just want to hop on the “trendy Moscato” bandwagon and have it as a sweet-tasting aperitivo (you can read more about this below), either way the Moncalvina is the right wine for the job and will deliver very good quality for the price.

(Explanation of our Rating and Pricing Systems)

And yet, before getting to the actual review of this wine, Moscato gives me the right opportunity for a little digression…

About the Recent Popularity of Moscato in the US

Over the last couple of years Moscato has known a period of incredible popularity in the U.S., where in particular a younger crowd (45 and below) seems to have embraced it as a “cool” wine to drink in the warmer months, not only with dessert (the way Moscato was originally “conceived” in Italy) but also as a before dinner drink (“aperitivo“) or even as a wine to pair with a meal. Just to give you an idea of so massive a commercial success, in 2013 Moscato has been the third most-sold wine in the United States, according to Nielsen, achieving an astounding $625 million in sales, thus surpassing those of Sauvignon Blanc or Riesling and closely trailing Pinot Grigio’s.

This process of making Moscato a hip wine has been facilitated by a few popular hip hop singers like Lil’ Kim and Kanye West who mentioned Moscato in the lyrics of their songs. Moscato’s generally affordable prices and typical low-alcohol, sweetish taste profile were also contributing factors to the appeal that Moscato seems to have for younger people.

Although I just barely fit within what has been identified as the Moscato lovers age group, I personally go in the opposite direction. I realize that Moscato is a wine that has incredibly identified itself with its traditional territory in the Asti area in northern Italy’s region of Piemonte and that has garnered a certain recognition (especially in its sparkling version) as an inexpensive, low-alcohol dessert wine traditionally served with panettone or pandoro on New Year’s eve. I get that. However, I have to be honest, Moscato is not my cup of… wine.

I mean, my favorite sparkling wines are dry (and actually, to me the less residual sugar the better) and they have good structure and a complex bouquet/flavor profile, essentially they are Classic Method sparkling wines, be it quality Champagne, Franciacorta, Trento DOC, Cava or the like. On the other hand, the sweet wines I like are still, but with similar characteristics: structure and complex aromas/flavors, such as Sauternes, Tokaji or quality Italian Passito or Muffato wines.

Anyway, I realize that simpler, lighter desserts may call for simpler, fresher sweet wines such as Moscato. What I struggle with, though, is how can people enjoy drinking a sweet Moscato with a main course… (if you want to learn why the ISA advocates against matching a sweet wine with a savory dish, you may go back to my earlier post about the ISA wine pairing criteria).

Perhaps it is just that everyone’s tastebuds are different or… could it be that, beside the nod of celebrity singers, one of the reasons why Moscato made it big in the U.S. is the proclivity of a large part of the U.S. population to sweet beverages?

I mean, the data is pretty impressive: according to a study, two thirds of adults in the U.S. are overweight and half of them is obese and one major source of the “new” calories in the U.S. diet is sweet beverages such as sodas. U.S soft drink consumption grew 135 percent between 1977 and 2001 and, while people often choose “diet” or “light” products to lose weight, research studies suggest that artificial sweeteners may actually contribute to weight gain.

Whatever the causes, the Moscato phenomenon seems to be here to stay, but let’s now get back on track and go on with our review of Coppo’s Moncalvina Moscato d’Asti!

Moscato Bianco (also known as Muscat Blanc a Petits Grains) is a very ancient white-berried grape variety that may originate from either Italy or Greece. The oldest mention on record dates back to 1304 in an Italian agricultural treatise under the Latin name “Muscatellus”, referring to a table grape grown near the Italian town of Bologna. Supposedly, the variety was indigenous to Greece and from there it was brought to Italy.

DNA profiling has shown that Moscato Bianco is the same variety as a number of Greek grapes, including Moschato Aspro, Moschato, Kerkyras and Moschato Mazas. Also, DNA parentage analysis demonstrated that Moscato Bianco has parent-offspring relationships with six other varieties: (i) Aleatico; (ii) Moscato Giallo; (iii) Moscato Rosa del Trentino; (iv) Moscato di Scanzo; (v) Muscat of Alexandria or Zibibbo; and (vi) Muscat Rouge de Madere. Five out of such six varieties originate from Italy, which could point to an Italian (instead of Greek) origin of Moscato Bianco. Without additional evidence, however, it is impossible to prove from which of such two countries it actually originated.

Moscato Bianco is an aromatic grape variety. It is widely grown in France and in Italy, where it is the only variety allowed by Piemonte’s “Asti DOCG” appellation, which comprises both Asti Spumante and Moscato d’Asti and encompasses a territory near the towns of Alessandria and Asti. Limited Moscato Bianco plantings also occur in the USA (California and Washington) and in Australia, where a mutation known as Brown Muscat (or Muscat a Petits Grains Rouges) is used to make Liqueur Muscat, a sweet, dark, fortified wine.

(Information on the grape variety taken from Wine Grapes, by Robinson-Harding-Vouillamoz, Allen Lane 2012 – for more information about grape varieties, check out our Grape Variety Archive)

About the Producer and the Estate

You may find information regarding the producer, Coppo, and the estate in the first post of this series of reviews of the Coppo lineup.

The wine that we are going to review today, Coppo, Moscato d’Asti “Moncalvina” DOCG 2011, was made from 100% Moscato Bianco grapes from the famed territory adjacent to the town of Canelli, near Asti. It was just 5% ABV and very slightly sparkling, and it fermented for a mere five days in stainless steel vats, where it also aged for one month, plus one additional month in bottle. The Moncalvina retails in the U.S. for about $16.

As usual, for my reviews I will use a simplified version of the ISA wine tasting protocol that we described in a previous post: should you have doubts as to any of the terms used below please refer to that post for a refresher.

In the glass, the wine was straw yellow and moderately viscous.

In the mouth, the wine was sweet, with low ABV and smooth; it was acidic, moderately tasty; light-bodied and balanced, with intense and fine flavors of apricot, tangerine and orange peel, as well as a long finish. In terms of its life cycle, the wine was mature – meaning, drink now, don’t wait.