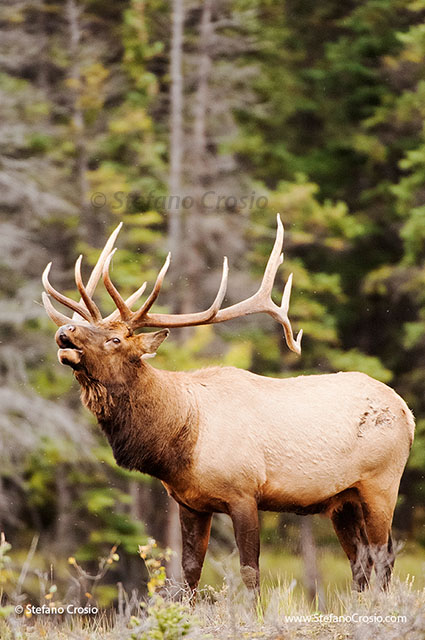 The image above shows a bugling elk in Jasper National Park, Canada, with traces of fresh wounds that it probably suffered in a fight with another bull.

During the mating season in the Fall, bull elk (Cervus elaphus) are used to bugling, that is sending out long, high-pitched rutting calls that can be heard for miles to attract cows or threaten other bulls. Bugling is often associated with the opening of the elk’s preorbital gland to release a scent that should further attract cows.

At that time of the year (September/October), bulls are nervous and aggressive, and this often reflects in their behavior, such as when they stick the tips of their antlers into the ground to dig holes, spray urine or even engage in battles with other bulls over cows or to establish dominance.

Especially during mating season, it is important to be cautious approaching elk because getting too close may (and often will) result in becoming victims of an elk charge or even worse being gored by elk. Photographers and wildlife enthusiasts should not invade the animal’s comfort zone and be watchful for body signs that may signal stress in the animal and the risk of an imminent attack, such as stomping the hooves on the ground, lowering the ears, strutting, etc.