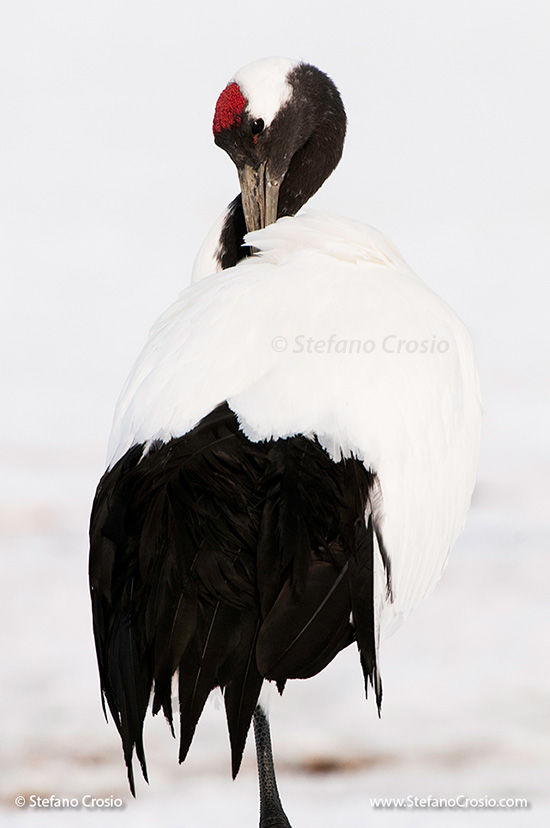 One more image from my photo trip to Hokkaido, Japan: this one is of an adult Japanese crane, also known as Red-crowned crane (Grus japonensis).

Japanese cranes are huge birds that are about 5 ft/1.5 mt tall and are the only crane species with white primary feathers. In adult individuals, the majority of the body is white, with black plumage on the neck and face and black secondary/tertiary feathers: their distincitve mark is a red patch on top of the head.

Japanese cranes are well adapted to cold temperatures and mostly feed on fish and grains. During the courtship and mating period, their display is amazing and at times a little goofy 🙂 with much posturing, wing-flapping, unison calling and… dancing, which includes jumping in the air and tossing sticks or grass around. I will publish images of this interesting behavior on a future post.

Japanese cranes are very elegant, beautiful birds, as you can see. Unfortunately, however, their elegance brought them trouble, as at the beginning of the XX century they were hunted to the brink of extinction in Japan so that their plumage could be utilized to adorn hats and other fashion accessories.

Nowadays, only a very small population of Japanese cranes, that is estimated at 2,750 birds, survives in Japan (where the local population is non-migratory and now protected) and in mainland Asia (mostly Russia, China, Mongolia and Korea). Although the population in Japan is stable, the mainland Asian population continues to decline due to loss and degradation of habitat.

As a result, the Japanese crane is classified as Endangered in the IUCN Red List of Threatened Species.